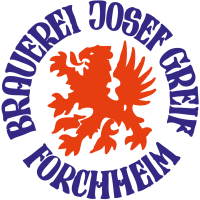 Forchheim's brewing tradition for over 150 years. It all began at the "Kapuzinerwirt," as the people of Forchheim called the house at number 18 on Sattlertorstrasse. In 1848, the year of the revolution, the brewery Josef Greif was born there and can now look back on 150 years of company history. The first brewer in the company chronicle was Johann Neuner. Later, the brewery belonged to Georg Wagner, who was soon followed by Johann Wagner. Finally, Daniel Greif took over the business. His grandson Josef, however, occupies a special place in this line of ancestors, as he is considered a far-sighted medium-sized entrepreneur. As early as 1928, Josef Greif had the foresight to acquire the "Eiskeller" of the Schindler brewery on the König-Ludwigs-Kanal in Forchheim - a strategically important decision. After the Second World War, the densely populated northern part of the city was built here.

Despite all the love of tradition, everything is in flux, and the preferences of the brewery's customers are also subject to constant change. Therefore, over the years, in addition to the classic beer varieties, other beer specialties joined the product range of the Greif brewery:


More information about the brewery can be found here: Brauerei Greif