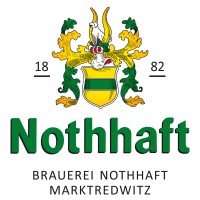 Marktredwitz - also known as Rawetz in northern Bavarian or Franconian - is one of the three largest towns in the Wundsiedel district in the Fichtelgebirge mountains. The district town is not only known because it lies directly on the Bavarian Porcelain Route. It is also known because the so-called "Zoigl" is still brewed here today. This is the cult beer of the Upper Palatinate, which borders directly on the region, and a real beer specialty. A bottom-fermented, amber-colored, unfiltered beer that used to be brewed in communal brewhouses. In other words, breweries where the citizens shared the brewing rights.

The Nothhaft brewery with its "Rawetzer Zoigl" also has its origins here. Founded in 1882 by Otto Nothhaft, the brewery is probably the oldest craft brewery still in existence in the village and the only remaining brewery. Since its founding, the brewery has been family-owned and will in all likelihood (fortunately!) remain so. Currently, three successors are ready for the next generation.

Nothhafts brews with the best water from the region. This water is so good that treatment is no longer necessary. And: It gives the beer a very individual taste. Just like the fermentation process, the fermentation at cold temperatures. Currently, the Nothhaft brewery has a total of about 20 beers in its assortment. Almost all varieties are available throughout the year. In this way, the regional variety of beer is maintained in Marktredwitz, which, by the way, has always been in keeping with the tradition of the private brewery. Speaking of tradition, Otto Nothhaft brewed Zoigl only a few decades after the brewery was founded. After that, the beer lost importance and fell into oblivion. It wasn't until 1994 that the recipe was unearthed again.

The beer of the Nothhaft brewery is available mainly in the area around Marktredwitz and in about 30 pubs in the region.

The Nothhaft family owns the brewery inn "Am Strand" directly next to the brewery, right next to the Troglau Mill and only 150 meters from the town center. In 1540 the house in the Ottostraße received the communal brewing right. Otto Nothhaft founded the brewery here a few centuries later. And it is here that today, "Am Strand", in the cozy inn complete with idyllic beer garden, you can enjoy good home-style cooking as well as a wonderful range of beers. Pure vacation feeling - even if the beach is not really nearby.


More information about the brewery can be found here: Brauerei Nothhaft