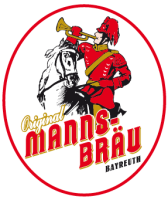 The traditional Franconian brewery pub with home-brewed beers and typical home cooking in Bayreuth. Tradition since 1823 that you can taste! Guests are offered a naturally cloudy Pils, better known and loved under the name Kräußen, and a deep dark Manns, sought after for its full-bodiedness combined with delicate roasted aromas. There's also a new beer from the Bräu brothers every month. Manns Bräu is closely linked to the Bayreuth brewing tradition. Until the end of the 20th century, the brewing site of the local basin brewers was a resident communal brewery. There, the Bayreuth innkeepers, who were endowed with a brewing right, produced their beer for their restaurants. Manns Bräu and Becher Bräu were two of them. Now both traditional businesses are run by the brothers Christian Hacker, Manns Bräu, and Johannes Hacker, Becher Bräu. Both are 3rd generation descendants of Becher Bräu in Bayreuth.


More information about the brewery can be found here: Manns Bräu