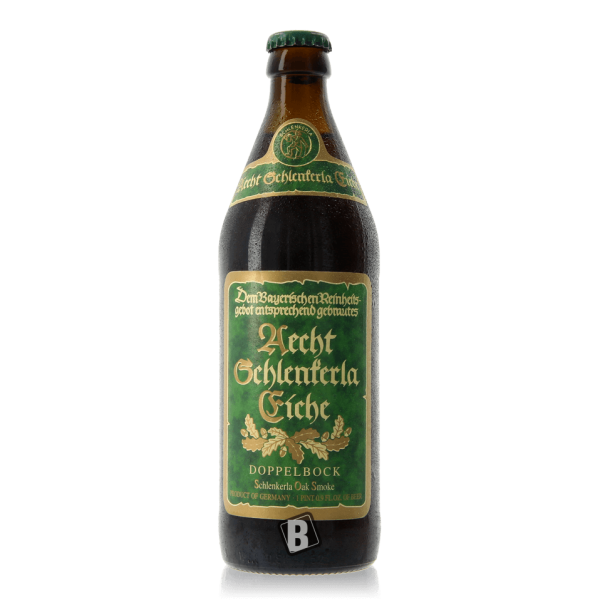 Description
Description
Buy Schlenkerla Rauchbier Oak Doppelbock in our beer store   Like all beers from the... more
Close menu

Like all beers from the Schlenkerla brewery, the Eiche Doppelbock is brewed with malt from our own production. The special feature, however, is already in the name. In the case of the Eiche Doppelbock, oak wood is used to dry the malt over an open fire. The result is multi-layered smoke aromas that are very gentle and unparalleled. The very individual signature, as you know from the house Schlenkerkla just. The oak Doppelbock can also shine with its appearance and taste. With a deep amber color, almost dark, crowned by a stately and white foam crown, the Doppelbock presents itself in the glass. Fragrant of fine and soft oak smoke and a slightly bacony notes, one is already looking forward to the first Antrunk. If the Antrunk glides over the lips and spreads on the palate, the spectacle begins. Smoky malt notes and sweetness meet bacon, generating a full-bodied and slightly heavy experience. Not surprisingly, Schlenkerla's Eiche Doppelbock has 8.0% alcohol after all, but it's so perfectly integrated that it almost drowns it out. A fabulous beer from Bamberg. Definitely try it!